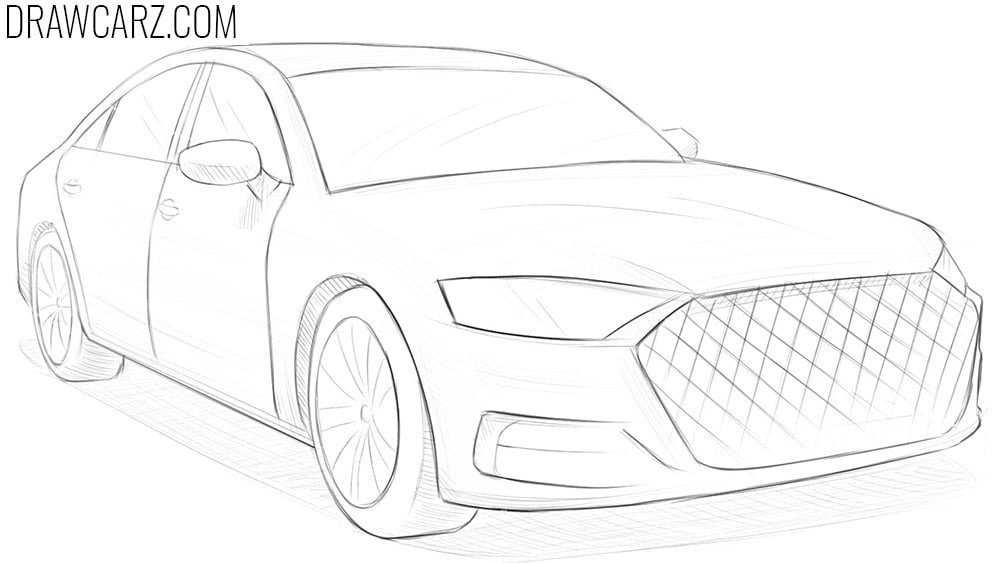 Most often we draw cars from the side, but in this instruction, we will show you how to draw a car in perspective.

With that in mind, let’s get down to the instruction on how to draw a car in perspective.

To draw a car in perspective, you need to imagine it in the form of simple geometric shapes. First of all, depict constructive lines that will help us draw the car. Given the laws of linear perspective, the lines should smoothly approach each other as they move away. 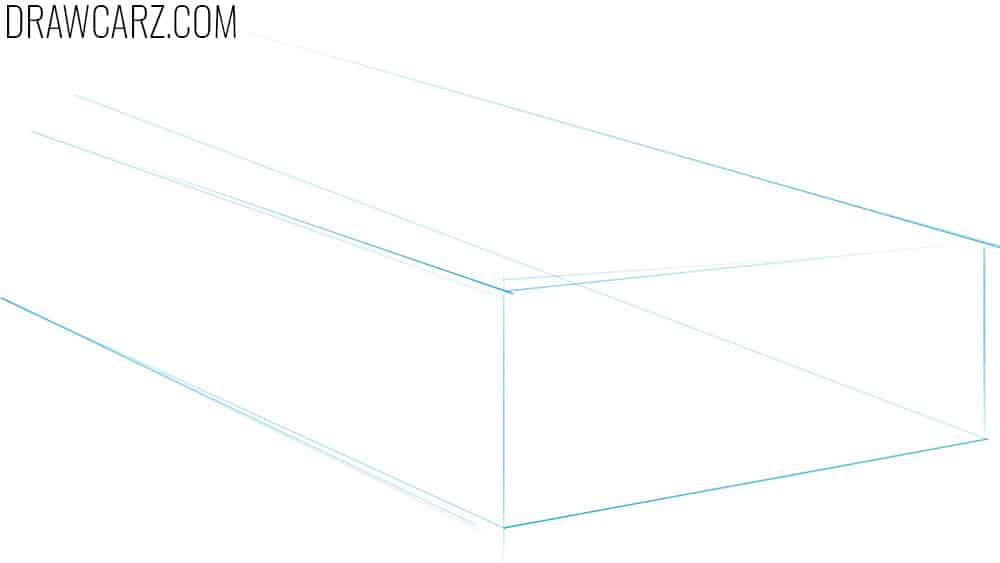 Now carefully draw the roof using smooth arched lines. In the same stage, depict the lines of the windshield. Notice how the details should be reduced in perspective. 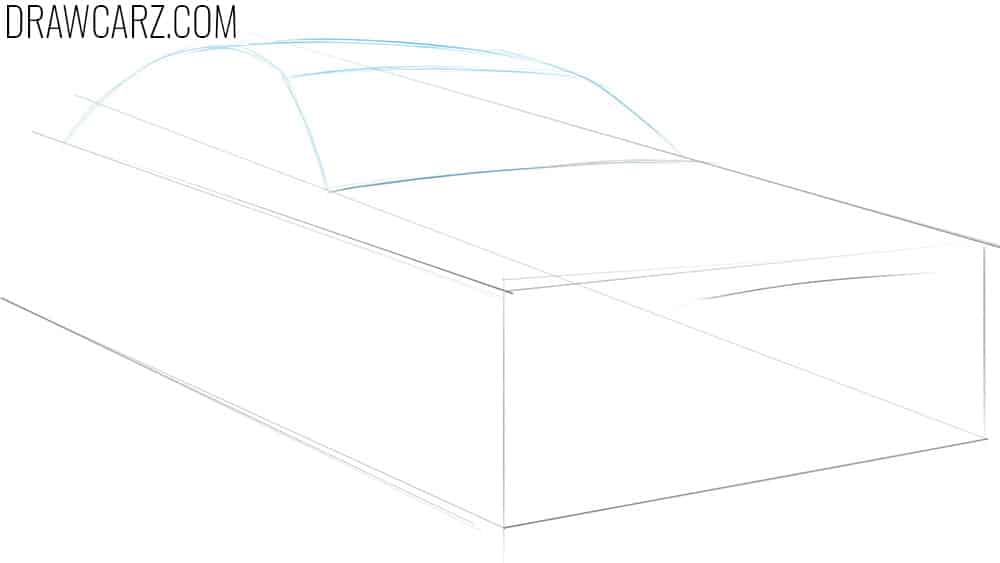 Now, continuing the line of the roof, depict the rear of the car. In the same stage, depict the wheel arches. According to the rules of perspective, the rear arch should be smaller and lighter than the front. 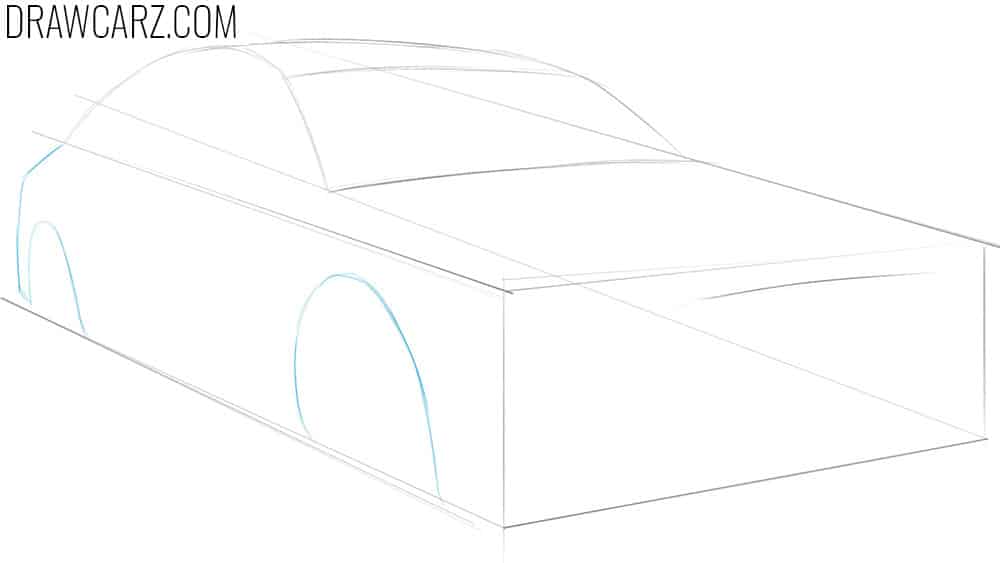 Now using the construction lines from the first stage, carefully depict the angular headlights and the upper part of the radiator grille between them. Next, using one arched and one straight line, depict the window frame. 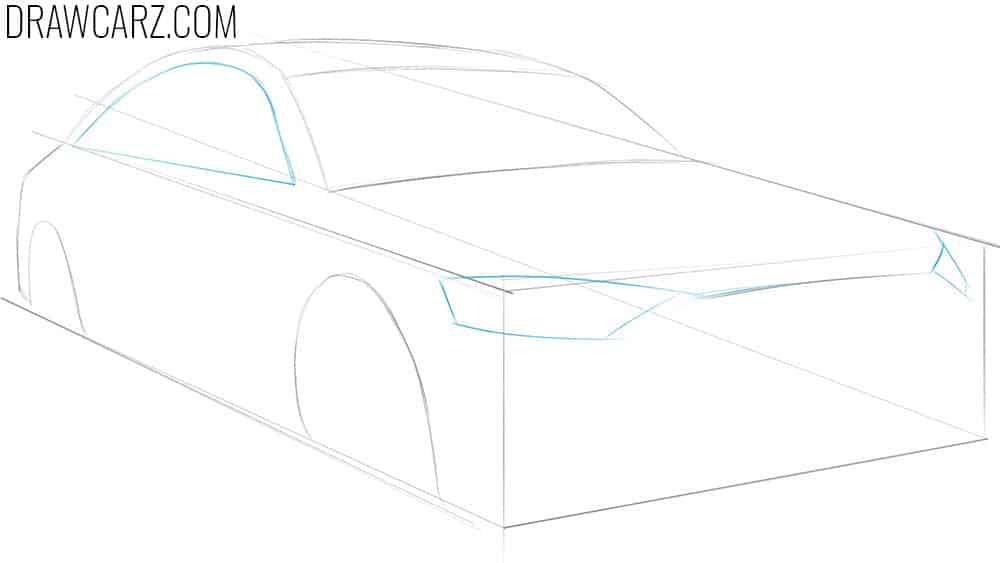 Now, continuing the lines of the upper part of the radiator grill, draw the lower part. Next, use a long, curved line to depict the bottom of the bumper. Complete the stage by creating the air intake at the bottom. 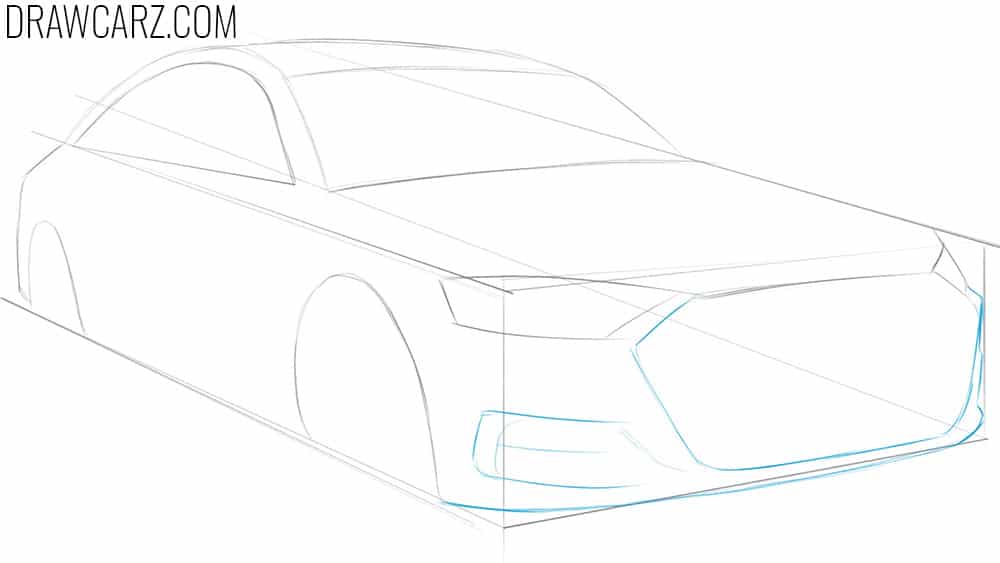 Now very carefully depict the wheels inside the arches. The front wheel should look larger and darker than the back. To check proportionality, look at the drawing through a mirror. 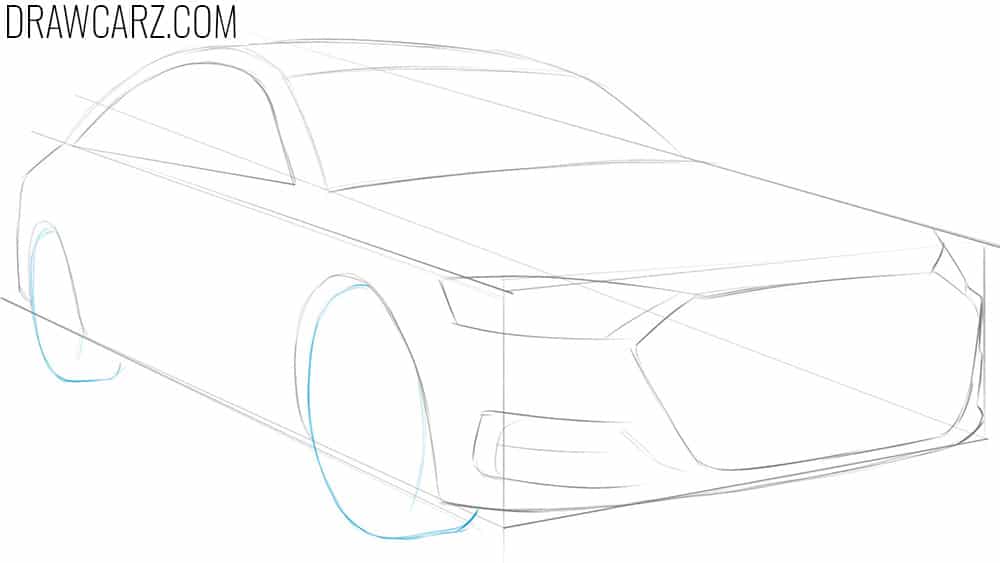 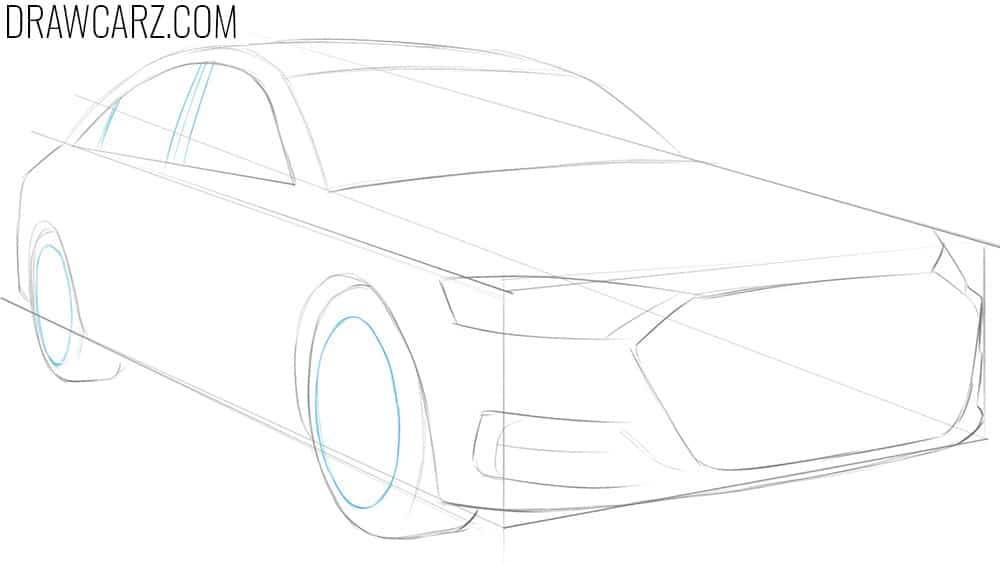 Now again go to the side surface of the body and depict the doors taking into account the fact that they should smoothly decrease as they move away. In the same stage, depict the door handles. 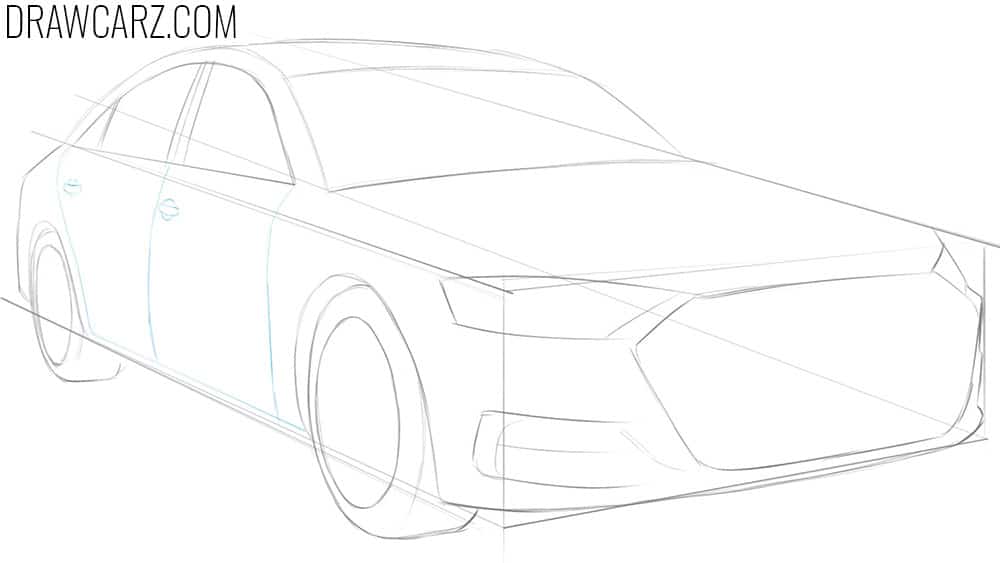 Now depict the central parts of the rims. Next, depict the lines of the spokes diverging from the center to the edges. Now go to the grille and create the texture using intersecting lines. 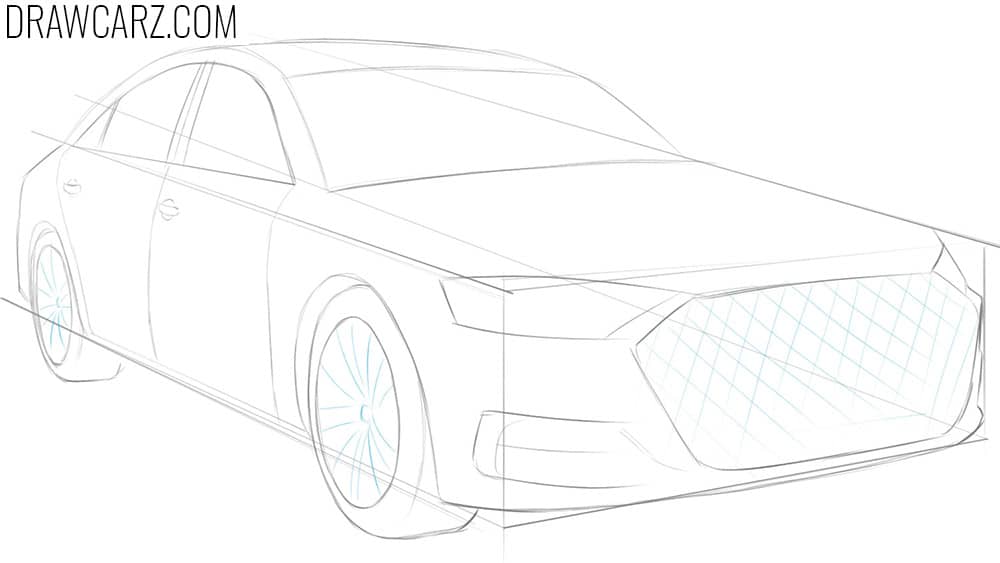 Carefully get rid of all construction lines. Then darken the closer lines, leaving the farther lines lighter. This will give the car drawing volume and realism. 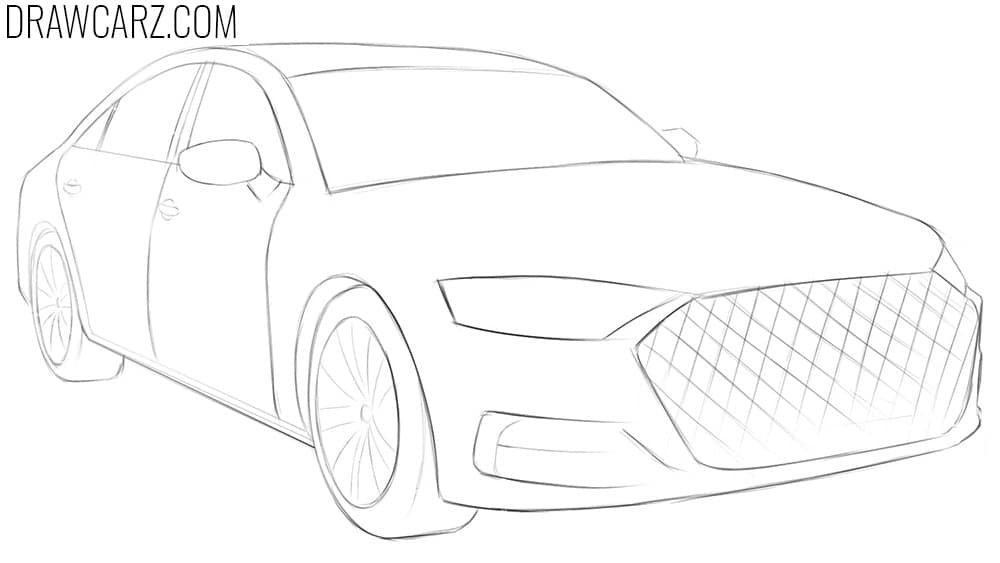 Add shadows starting with darker ones and working towards lighter ones. On glass surfaces, depict highlights using simple lines. Depict a cast shadow under the car so that the car does not look like it is hanging in the air.

You can continue to add shadows to make the car drawing look more voluminous and convincing. Note that the shadows that are closer to us should also be darker and more contrasting than those that are in the distance.